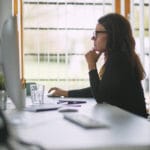 After the controversial Wolf Ollins logo for London 2012 – likened to a swastika and Lisa Simpson doing something unmentionable, the Olympics has managed to stir up yet another graphic design debate with the Tokyo 2020 logo.

With the withdrawal of Kenjiro Sano’s original logo design amidst claims it resembled a pre-existing logo for a Belgian theatre, the Tokyo 2020 Olympic Committee launched a public competition in November to find a replacement.

The competition received over 14,000 entries and the only criteria was that entrants have to be over 18 years old, and either Japanese nationals or foreign nationals with the right to live in Japan. No design experience is required.

The competition has sparked further debate among the professional design community that by allowing non-professionals to enter their logos disrespects and devalues the work of the professionals. Also the prize of ¥1 million (just over £5,500) in comparison to the reported £400,000 that Wolf Ollins were paid, is no where near enough for a emblem which will be used on multiple occasions around the world. A final decision is expected to be made in the Spring.